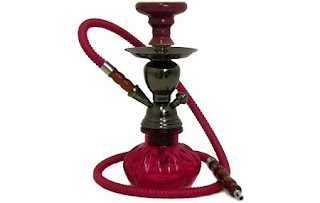 Me and the man is proud owners of a water pipe. Non of us are daily smokers, so the water pipe is seldom used. But when it is used, maybe three-four times/summer, it is with joy and excitement. I have a weakspot for ceremonials and to prepare, light and finally smoke a water pipe is really a ceremonial. Where we live there´s a lot of people with arabic origin and warm summer night the air is filled with smoke from water pipes, barbecues and the still sunwarmt greenery that surround our patio. Such nights it is a good chanse that we bring out our water pipe as well, we´re sitting under our red sunshade and smokes for hours, while the kids play in the lanes, the neighborhood cat lies down at the electric cabinet and the hedgehogs comes around begging for something to eat. Foreign languages, happy laughters and arabic popular music is heard all around, it is like a small part of abroad has landed in my neighborhood and oooh, I like it so much! I really like where I live and have stopped dreaming about moving.
Well, I will stop babbling about our nice neighborhood and come to the point. The water pipe, or also known as hookah, shisha and nargilhe. In Sweden, the water pipe has kind of a bad reputation, as many think it is used to smoke haschisch with. I promise that neither me nor my husband ever have smoked haschisch in our water pipe! You don´t even have to smoke tobacco, there is herbal mixes also available. Well, the tobacco is mixed with molasses and flavoured with strawberry, licorice, apple or ginger, well actually you can find a lot of different jummy flavours.
You make a little ball of foil and fill it with tobacco and then packed it with charcoal pieces and put it all on the pipes head. It is like smoking cool, tasty clouds bursting with strawberry, licorice or whatever taste you want. If I lure someone to try water pipe now, I strongly recommend you to go for the tobacco free mix. Tobacco is addictive and very unhealthy!
Serge Lutens Fumerie Turque manage to captivate the water pipe smell and soul very accurate. There is the smell of glowing charcoal slowly turned into ashes. The first airy and at the same time sharp smell of tobacco that will then mellows and becoming more saturated and aromatic. It smells like the tobacco is flavoured with berries, roses and honey, I think it is a very exclusive tobacco intenden for true epicurés.
This perfume is so trustworthy that I almost hear the familiar and cozy sound of bubbling water. I can do nothing but sink in to the soft pillows, puffing in my pipe, have another bite of turkish delight and enjoy the arabian music. Thankfully I don´t feel like smoking water pipe -in the middle of the winter- when I wears Fumerie Turque, no I am fully content just with the smell of it.
Fumerie Turque eventually become softer, the once harsh smell of smoke is gone and the smell is now like the smell of a cooled down water pipe that has been left over the night. The aromatic and unmistakable smell still lingers around it. I don´t think it´s a good idea to smoke water pipe inside, but when you carrying the water pipe inside the smell is still there and it is a kind of cozy room fragrance.
Fumerie Turque has excellent sillage, good longvity and I do like it a lot. But I can see that people having troubble with tobacco smoke also having troubble with this, since it is spot on. It isn´t the first perfume I would put on after a night of partying and party smoking either! But I do recommend you to try it.
Upplagd av rebella kl. 09:26