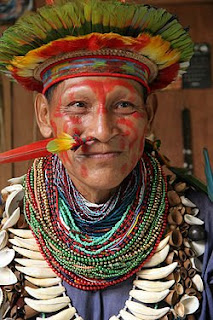 Is it possible to smoke carrots? Nah, probably there is smoke of a whole different kind that great me when I enter the shaman´s hut. Honore des Pres Chaman´s Party is really fun to test. This is a playful and adventourus fragrance. It is actually quite impressing if you think that it´s only contain natural ingredients, well at least I get impressed.

Where Sexy Angelic starts with a blast of bitter almond Chaman´s Party starts with a really strong blast of smoke and shortly thereafter comes a smell of freshly sliced carotts. I like it and dosn´t have anything against to join the Chaman´s Party. The picture below shows a sweat lodge, a ritual building that has occured/occur in the shaman belt, that is Scandinavia, Russia, parts of northern Asia, North- and South America. I have never attend a sweat lodge ritual, but however I have tried finish smoke sauna, and now when I sit here and write I get really, really keen on a heavy smoke sauna, or even better, a sweat lodge ritual.

Chaman´s Party has secret notes of aphrodisiac´s and rainforrest herbs. I buy the whole kit, this I like. The smoky note lingers all through the fragrance, now and then clove emerge to the surface and there is also some notes of sweetness, greenery and a fresch, crispy smell of flowers.
Chaman´s Party has no problems with the sillage, it is good and so is the longevity. Chaman´s Party has a dry character and even if I think of it as playful, it is an grown-up fragrance.

When I wear Chaman´s Party I feel like poor up a hot bath with strange herbs in it instead of pleasantly smelling oils, light candles and put on some suggestive native american drum music and... well, I will spare you the details. Well, in lack of a real sweat lodge that is, I think it would be kind of hard to make one in our little row house, unfortunatly!

Chaman´s Party is an interesting olfactory trip and I am really happy to have tried it. The other perfumes Nu Green, Bonte´s Bloom and Honore´s Trip is good, but as always when it comes to perfumes it is all about personal preferences and skin chemistry. Among Honores des Pres fragrances Chaman´s Party is the brightest shining star, with Sexy Angleic as a close second.

PS. I really hope I don´t misunderstod the name, but whatever I can find Chaman means Shaman, but it could as well be some rich french guy throwing jetset-parties at the Riviera, how could I know.
Upplagd av rebella kl. 08:21