The smell of Soap. 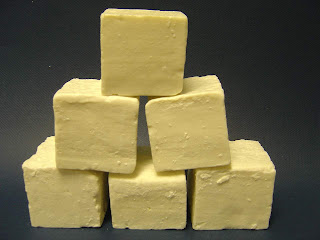 When I was a kid both soap and schampoo was stronger perfumed than it is today. When I have visit countries in the Mediterranean area I have noticed that it is still quite common with strongly perfumed toilet requisites. Seems like the national allergic association isn´t so strong or powerful in Italy? Wich dosn´t means that I don´t appriciate the work of the allergic associations, I also prefer my usual soap to have a discrete smell, since I don´t want it to compete with my perfume.
It may been of nostalgic reasons that I like perfumes with the smell of soap. Or even detergent. Not to mix up with the smell of newly showered, no it´s about a more or less soapy note that otherwise dosn´t need to have a fresh, clean or newly showered notes. I am only looking for the note of soap here.
One of the soapiest perfume I encountered is L'Artisans Premier Figuier Extreme. Maybe it smells like a figtree on you, or as fresh figs or something else, but on me it smells like exclusive, handmade olive soap. Not a foamy recently used olive soap, but as a pure and fresh olive soap wrapped in tissue-paper on it´s way home from the shop. Unfortunatly I have to admit I am not so found of it. Often when people refer to a perfume as soap smelling, it is negative, and in the case with Premier Figuier Extrem I have to agree, this kind of soap I want a soap to smell like, not a perfume.
No if I want the smell of my childhood soaps I have to look after Ivoire de Balmain. Here it´s no holdning back, the aldehydes are stunningly in the beginning. Ivoire you have to put on with very light hands, one spray to much is to much. Well, in any case it smells like the white, a bit soggy and sandy soap that used to lay on the pier at the cottage and that I used to wash my hands with after a fishing trip. In spite of that, Ivoire managed to become a quite elegant and ladylike fragrance after about half an hour. But if you easily gets headache from strong aldehydes you just might stay away from Ivoire.
From soap to detergent it isn´t that a far distance, right? I´ve got me a new favourite anyway, Dolce & Gabbanas Sicily. How anything with the name Sicily and with notes of banana (!), jasmine, nutmeg and sandalwood can smell as Sicily does is a mystery for me. It smells wonderfully of foamy, bubbly detergent! And despite that it smells good! Really good, creamy, powdery and sweet. Maybe it is the housewife in me that misses all the hand dishwashing? Oh, horrid tought! It is only about four years since we got us a dishwasher and I guess you can imagine the amount of dirty glasses in a family with four or five juice-and milkdrinking kids. Well, whatever, more Sicily to desperate housewifes is a motto as good as any.
And to last I have saved a real dainty for soap lovers, namely Donna Karan`s Chaos. I have never stayed at a luxuoirus hotel in one of the world´s biggest cities, but I think that the soaps in that kind of hotel room would smell something like this. Imagine a beautiful, creme coloured soap on a wonderful, thick towel on a black marble desk besides a beautiful round basin. Now, Chaos happens to be so much more than a soap smelling perfume. It is a far more complex and perfect creation only to be compared with soap, but the note of soap is still there. I will write more about Chaos later, since I think it deserves an review of it´s own (and a big bottle as well, but that is a later project).
Do you have any soap smelling favourites among perfume? Or do you hate anything soapy in perfume?
Upplagd av rebella kl. 09:09