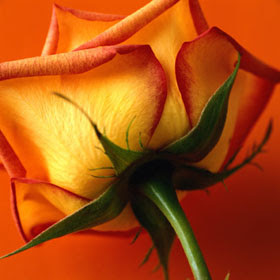 I have mentioned L'Artisan`s Safran Troublent earlier (in swedish). But then it was about safron and now it is all about roses. As pink as the rose in Brulure de Rose are, as golden and warm orange is the rose in Safran Troublant. No matters if you want the rose or the safron in Safran Troublant, it is a perfect cold weather fragrance, I have found few perfumes that makes you as warm and cuddly as Safran Troublant.
While Brulure de Rose is a perfume that develop and changes quite much, Safran Troublant is quite linear and stays almost the same from beginning to end. In spite of that there are some similarities tough Safran Troublant also are a gourmand and also exaggerate the natural smell of
roses. I found it hard to say if it is a safron smelling rose or safron smelling as roses? It might not be that important either, but no matter what, it smells like something I could easily eat (a lot of).
I wonder if there is any exclusive oriental dessert with both safron and rose in it? No, no I must quit thinking about desserts now.
The rose as a flower have some erotic connections and one might belive that this warm fragrance would be a bit more erotic than Brulure de Rose, but no I really don´t think so. Safran Troublant is more of a safe, warm and welcoming fragrance, just that kind of fragrance a mother could wear during the Christmas preparations, wich not at all means that Safran Troublant is a dull or frumpish fragrance. More likely the mother soon would be all hugged up by husband and kids, and that isn´t so bad, is it?
I would enjoy having a big bottle of Safran Troublant, but as with other fragrances from L'Artisan it makes me a bit frustrated. They manage to make the most gorgeus and thrilling fragrances, but the lack of staying power are so frustrating. I expect something that expensiv to last a bit longer than the usual one and a half hour or two. They aren´t launched as eau de colognes after all. Safran Troublant is among them with best longvity on me, but I still can´t count on more than about two hours. Best longvity of all I have tested among L'Artisan`s fragrances is Dzing!
Do you have better experinces with L'Artisans staying power? Is it me that is wrong in a way?
Upplagd av rebella kl. 14:14

I have the same problem with LAs lasting. The exceptions I have found are Fleur de Narcisse & Iris Pallida. They are lovely, last all day & are the most expensive ones!

That`s really bad, because a lot of their fragrances are wonderful in any other way. I haven´t yet tried them, but I have seen that they are pricy...

Dear Rebella, I couldn't agree more with your excellent review. I have recently tried a few of L'Artisan's fragrances; Safran Troublant and Poivre Piquant were amongst them and I liked them both, but had the same problem about longevity, which will probably prevent me from splashing out on full bottles.